Despite a smidgen of fear of flying in the wake of the missing Malaysia Airlines Flight 370, I am utterly excited right now as I am about to be on board in a couple of hours. It’s impossible not to be, especially because I’m going to witness the coronation night of Binibining Pilipinas 2014 at the Smart Araneta Coliseum on March 30, 2014, where five most exceptional Filipinas will be chosen to represent the Philippines to Miss Universe 2014, Miss International 2014, Miss Tourism Queen International 2014, Miss Supranational 2014, and Miss Intercontinental 2014.

And, what’s more, the reigning Miss Universe Gabriela Isler of Venezuela, together with the Miss Universe Organization president Paula Shugart, will be gracing this most prestigious beauty pageant in the country. But while Lara Dutta of India, Miss Universe 2000, will forever be my ultimate favorite beauty queen, I won’t deny the fact that I’m one of Gabriela Isler’s enamored fans and I would also be honored to shake hands with the world’s most influential pageant heavyweight, Paula Shugart. Whatever it takes, I will try my best to muscle into even just a brief conversation with the duo.

But if ever luck is not meant to sit on my lap come Sunday night, being in the same rendezvous as Gabriela and Paula, attending the Binibining Pilipinas 2014 pageant and seeing the strongest batch of candidates in the history of Philippine pageantry would be more than enough reason for me to thank God for such a rare experience.

Yes, we’ve read and heard a myriad of compliments on Kris Tiffany M. Janson, our very own bet for Binibining Pilipinas 2014. And I am personally euphoric that no less than Norman Tinio of Norman’s Blog has numbered her among his top favorites for any of the crowns to be given on the March 30 coronation night at the Smart Araneta Coliseum in Quezon City. Just recently Kris took a fast flight home to Cebu for a brief respite from a whole slew of prepageant activities in the metropolis.

Here, she feels swallowed up by the strong support system of her family and friends. “I am overwhelmed seeing the support of the Cebuanos. I feel more confident now, and it has become my driving force to give my best,” Kris Janson replies to my text message, as quickly as she admits to being full of gratitude upon knowing that she has a throng of supporters flying to Manila to personally show their support come pageant night.

As early as the first week of January, my round-trip flights were already confirmed, and Kris was beyond touched when I told her that, during the Miss Cebu 2014 Coronation Night in which she co-hosted with Miss Earth 2008 Karla Henry and the fabulous lifestyle writer Vince Escario.

Jonas Borces, an avid supporter from the first day of screening, says, “It’s easy for Cebuanos to expect a crown from Kris Janson because not only is she facially attractive, she is also spiritually beautiful.”

Dexter Alazas, Admodels Stylefirm’s managing director and one of Kris’s Cebu-based mentors, believes: “The time has come for Kris Janson to shine and show us what she’s made of: a beautiful Cebuana in both heart and mind. With her sincerity and amiable personality, no doubt she magnetizes everyone she talks to. Her physical attributes make her one of the strongest bets in the competition, and I’m confident in her power that she will shine come finals night. I’ve known Kris for the longest time, since I discovered her as a little kid back then. From her modeling stints up to her Miss Cebu 2009 victory, Kris Tiffany Janson has proven her worth.” 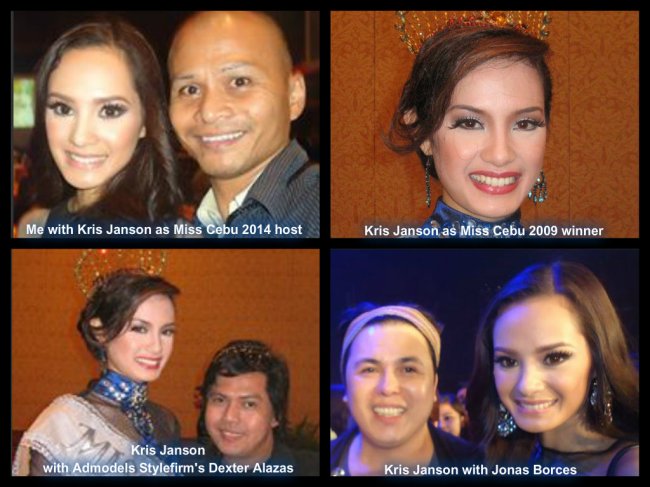